A building in Artarmon was having a hell of a time of it, as both their sewer line and sprinkler hydrant services had completely failed and were running into the street. Our diverse skill set and solution focussed approach allowed us to replace and reline both faults quickly, ending the disruption for all involved. 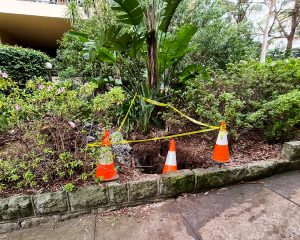 The sewer boundary tap had completely collapsed and was beyond repair. As such, we advised the client that a relining solution wasn’t appropriate and proceeded to excavate and replace the boundary tap with a new PVC one. Following this, we relined from the boundary tap under the retaining wall, footpath, gutter, and road, finishing at the Sydney Water connection, ensuring the long-term health of the system. Throughout the works, we diverted the sewer line, meaning there was no disruption to the building. 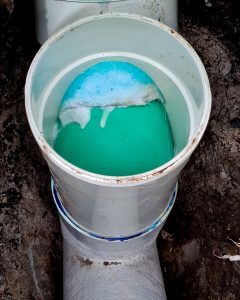 Unbeknownst to the owners, the sprinkler hydrant main running from the connection at the road had completely burst at some point.

Due to this, the inside of the old cast iron pipe had eroded (check out the science that resides in your plumbing article) allowing growths to form that displaced the pipe in a number of sections, causing the leak. Typically this kind of fault would require majorly expensive and disruptive excavation work. But we’re not typical tradesmen, we knew there had to be a better, simpler, and cheaper solution, and find it we did. Using our CC.TV and milling equipment, we cleared the inside damaged cast iron pipe back to the bare metal to provide a structure in which we could reline the rest of the section. As the system fed from the town’s potable’ (drinking) water supply, we used a safe, Watermark approved resin to reline the endure run back into the basement car park, securing the system and guaranteeing it for 25 years, as per our guarantee. 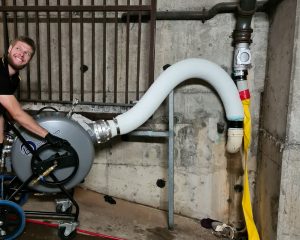